Every year in the second half of December, ICEP brings Western classical music into regions in Asia with limited exposure to it. From December 18 to 27 2018, ICEP’s touring string quartet performs and interacts with Vietnamese residents in schools – including music schools – orphanages, hospitals and schools for people with special needs, such as patients with Hansen’s Disease. They will also visit the Ho Chi Minh Communist Youth Union in and around Hanoi and Ho Chi Minh City. A visit by the touring musicians to Tuyên Quang Province is being coordinated by the United Nations’ International Fund for Agricultural Development (IFAD).
MUSIC SHARING, founded by Midori in 1992, focuses on bringing live music to people living under special and marginalized circumstances such as those who have suffered as a result of natural disasters, medical conditions, geographical limitations, and economic hardship.
The string quartet touring with Midori this season consists of Tatjana Roos (violin), Charlotte Malin (viola) und Alan Toda-Ambaras (violoncello). The young musicians were selected through a rigorous audition process. They will also travel to Japan in June 2019 for follow-up concerts.
You can find more information on Music Sharing and ICEP here and about the Touring Party Personnel here.
Midori and her team are chronicling their activities in Vietnam on the Music Sharing Blog, which also includes entries from the last travels to India in 2017 and Nepal in 2016. On MUSIC SHARING’s YouTube channel you can also find videos of those last two ICEP tours.
For further information on Midori’s commitment as a UN Messenger of Peace, you can find:

This year’s ICEP tour is, in part, organized in collaboration with IFAD, the office of the Honorary Consul of Vietnam in Aichi – in commemoration of the 45th anniversary of Vietnamese-Japanese Diplomatic Relations –, and the Sasakawa Memorial Health Foundation. In January 2019, IFAD published an article on Midori’s visit to Vietnam with the ICEP Quartet.
Special thanks go to the United Nations’ International Fund for Agricultural Development (IFAD). MUSIC SHARING values the IFAD’s commitment to invest in rural people, empowering them to increase their food security, to improve the nutrition of their families and to increase their incomes.
MUSIC SHARING is a non-political entity and operates solely on generous support provided by individuals, corporations, and foundations. For ICEP Vietnam, these include: Kikkoman Corporation, Mitsui Oil Exploration Co., Ltd., Kao Corporation, Saigon Tourist, Hermes Gift Ltd., The Japan World Exposition 1970 Commemorative Fund.

With the beginning of the fall semester in early September 2018, Midori joined the Violin Faculty at the Curtis Institute of Music in Philadelphia.
Announcing her appointment, Curtis President Roberto Diaz said, “A soloist renowned worldwide who pairs her international performing schedule with a commitment to community collaboration and outreach, she embodies the artist-citizen idea that we want to instill in our students. Curtis enjoys a long tradition of distinguished and active performers serving on the faculty and Midori’s work to bring music to underserved communities fits so well with our thriving community engagement program at Curtis. I’m sure that all our students – not just violinists – will have an opportunity to benefit from her presence here.”
During the 2017–18 academic year, Midori visited Curtis a number of times to give masterclasses, attend student-centered activities and work with students participating in the school’s community engagement programs and Artist-Citizen courses.
Midori previously spent 14 years on the faculty of the University of Southern California’s Thornton School of Music, where she was a distinguished professor, a department chair for eight years and holder of the esteemed Jascha Heifetz Chair. She will continue her involvement at USC in a visiting artist role.

photo: (c) Walter H. Scott
On August 25th 2018, Midori will perform a movement of Leonard Bernstein’s Serenade after Plato’s Symposium at the Bernstein Centenary Celebration at Tanglewood in Massachusetts, the summer home of the Boston Symphony Orchestra. Other performers will include Yo-Yo Ma, Audra McDonald, Thomas Hampson, Christoph Eschenbach and Michael Tilson Thomas. The Boston Symphony will be joined by members of the New York, Vienna and Israel philharmonics, the Pacific Music Festival and the Schleswig-Holstein Festival.
This is no ordinary date. It will undoubtedly bring back memories – not only for Midori but for older members of the audience as well – of the occasion in July 1986 when her performance of this same work, under the baton of its composer, caused a sensation worldwide and took its place in classical music history. The New York Times summed it up the following morning with the front-page headline “Girl, 14, Conquers Tanglewood” (Note: Midori is referred to as Miss Dori):

“All had gone normally through the first four movements of Leonard Bernstein’s Serenade, assuming you count as ”normal” a technically near-perfect performance on a muggy night of a difficult piece played from memory (Mr. Bernstein, who was conducting, used a score) with winning artistic insight by a 14-year-old.

But then, in the heat of the long and complex fifth and final movement, Miss Dori broke her E string. She quickly turned to Malcolm Lowe, the concertmaster, who looked nonplussed but finally handed over his Stradivarius. There was a moment’s pause while Miss Dori fitted her chin rest onto the new violin. But then she proceeded absolutely unfazed.

Then it happened again – another snapped E string. By this time Mr. Lowe was playing the Guadagnini of the acting associate concertmaster, Max Hobart, and Mr. Hobart had retuned Miss Dori’s violin and was playing it, ”faking” his way around the missing E string.

Miss Dori took Mr. Hobart’s Guadagnini from Mr. Lowe, thinking at first it was her own violin, restrung. Realizing that it wasn’t, and unwilling once again to interrupt the music, she played on, perfectly. When there was a brief pause in her part, she snapped on her chin rest, and finished the piece on Mr. Hobart’s violin.

When it was over, audience, orchestra and conductor-composer joined in giving her a cheering, stomping, whistling ovation.”

This season, which marks what would have been Bernstein’s 100th birthday, orchestras around the world have invited Midori to perform his Serenade. So far, she has played it in Poland, Austria, Argentina, the United States (Florida), Germany, Korea and Hong Kong. In July, prior to the Tanglewood event, she performs the Serenade with the PMF (Pacific Music Festival) Orchestra in Japan and with the Aspen Festival Orchestra at the Aspen Music Festival in Colorado.

Violinists, violists and cellists wishing to apply for Midori’s 2018/2019 International Community Engagement Program (ICEP) must complete and deliver their applications by 5 p.m. (Japan time) Monday July 2nd. Young musicians between the ages of 20 and 30 with a strong interest in community engagement are eligible to participate.The ICEP Quartet will bring music to schools, hospitals and institutions in Vietnam this coming December and will reunite for formal and educational performances in Japan in June 2019.
Information about the International Community Engagement Program
Application details
The 2017/2018 ICEP is currently coming to an end in Japan. The participants have been blogging.

In early May, when Midori was in Berlin to perform with the Deutsches Symphonie-Orchester and Constantinos Carydis, she and a violist and cellist from the orchestra visited a community shelter in Hanjerystrasse that houses refugee women and children from Afghanistan, Syria, Libya, Iraq, Eritrea and Ethiopia. The musicians performed works by Mozart and Bach for the residents and staff and were given a tour of the home during which they learned about its background and history. 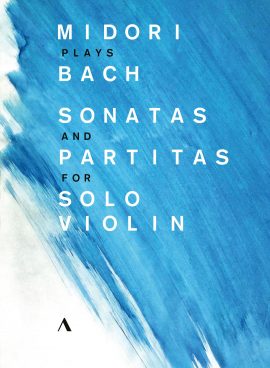 The DVD “Midori Plays Bach”, released by Accentus in October 2017, was included in the German Record Critics’ Award’s Quarterly Critics’ Choice List for the first quarter of 2018 in the category of “Concert & Documentary serious music”.
An excerpt from the critics’ statement:
“This DVD does not simply present a recorded concert situation but something completely new as Midori discovers the castle [of Köthen] on foot. Besides her flawless playing, this is what makes this DVD production so special…“
Here you’ll find the complete statement (in German).

Audiences and critics in Ansbach, Stuttgart, Munich, Halle and London warmly welcomed Midori, pianist Jonathan Biss and cellist Antoine Lederlin in a program featuring Beethoven’s Piano Trio in G major, Op.1 No.2, Schumann’s Fantasiestücke, Op.88, and Dvořák’s Piano Trio in F minor, Op.65.
Early in the tour, the German radio station BR-KLASSIK posted an interview with Midori titled “Practicing is Like Meditation”.
The Stuttgarter Nachrichten review said, “All three musicians are proven soloists, who came together here as a trio, which was characterized by concentration, style awareness and the perceptive will to expressivity. Great, as they corresponded to each work with a decided sonority: structurally clearly marked by Beethoven, atmospherically finely worked by Schumann and with almost symphonic fullness by Dvorák.”
Following their performance at London’s Wigmore Hall, one reviewer wrote, “in many ways they seem to be ‘perfect’ musical partners, the playing of each characterised by meticulousness, refinement and beauty of sound: exquisite, shared artistry. During this recital, the lucidity and coherence of the musical ‘thinking’, expression and execution was almost tangible. The musicians combined humility with absolute commitment and concentration…”
In the words of Michael Church, also reviewing the Wigmore Hall concert for The Independent, “It was a pleasure to … be reminded of [Midori’s] artistry…  typically – she had set up this Wigmore concert to showcase other talents as much as her own. Enter cellist Antoine Lederlin, member of the Belcea Quartet, and pianist Jonathan Biss, the leading Beethovenist of his thirty-something generation. The repertoire too was designed for equality: trios by Beethoven, Schumann, and Dvorak in which Lederlin’s warm sound and Biss’s forceful muscularity came to the fore. Midori’s tone was, as ever, sweet and pure; an evergreen talent.”