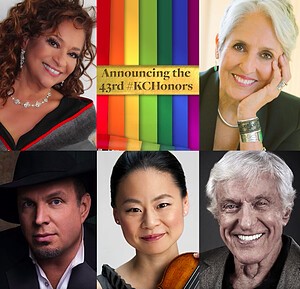 Midori has been chosen as a recipient of the 43rd Kennedy Center Honors. The other honorees are Debbie Allen, Joan Baez, Garth Brooks and Dick Van Dyke.

“The Kennedy Center Honors serves as a moment to celebrate the remarkable artists who have spent their lives elevating the cultural history of our nation and world,” said Kennedy Center Chairman David M. Rubenstein. “With an international presence for over 35 years, violinist Midori combines graceful precision and expression for performances building connections between art and the human experience”

Acknowledging the honor from the United States’s National Cultural Center, Midori said, “Artists have a singular responsibility, through our work and deeds, to echo and mirror our society and serve its needs. As a new chapter of life is about to begin for all of us, I especially feel the current moment’s necessities and opportunities to explore a spring of new and preserved energies and discoveries, to play my part in seeking various avenues and forms of creativity and recovery. From an early age, I have been gifted with extraordinary experiences. I consider them to be my treasure and fortune that I might now draw upon. I wish to accomplish much going forward. My plans are to be making music again, in both pioneering and traditional ways, to sing out and to stir what lies within us, to describe mysteries, of the heart and of the mind. So, in the spirit of peace and connectivity through this country and the world, I am thrilled to be a recipient of one of this year’s Kennedy Center Honors, as we, together, reach toward renewed expression of the dreams and hopes that unify us all.”

The 2020 Kennedy Center Honors ceremony, traditionally held in December, was postponed until May 2021 due to the COVID-19 pandemic.

Kennedy Center President Deborah F. Rutter said, “2020 has shined a bright light on the impact of how art and culture speaks to our collective human experience. It can meet us at any moment—and sustain us during the most challenging days. Each of the 43rd Kennedy Center Honorees and their work continues to speak to American culture and our national fortitude. We are thrilled to be able to fete these cultural icons in a time where the world and the nation needs the arts more than ever.”

For an article announcing this year’s awards, Midori told The New York Times that the pandemic had given her a renewed sense of appreciation for performing in front of an audience: “It made me realize how precious the moments of being able to do things live are.”

The Honors recipients are confirmed by the Executive Committee of the Kennedy Center’s Board of Trustees in recognition of their contributions to American culture through the performing arts. An Honoree medallion ceremony for the Honorees and a limited audience will be hosted by the Kennedy Center during the week of May 17–22. The Honors Gala will be recorded for broadcast in the United States on CBS television as a two-hour primetime special on June 6, 9 p.m. ET.