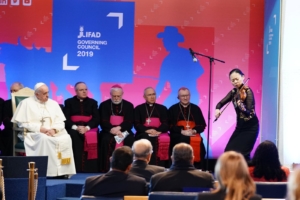 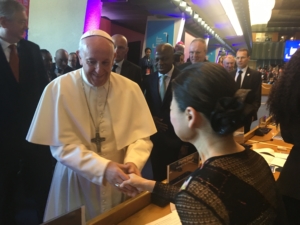 Photos  (c) IFAD
Midori performed the Preludio from Bach’s Partita No. 3  in E Major for solo violin at the Annual Meeting of IFAD, the United Nation’s International Fund for Agricultural Development, and made a speech in which she called on Pope Francis and other world leaders in attendance to believe in the transformative power of women and girls in underserved remote communities.
Recounting her recent visit to rural villages in Tuyen Quang province, Viet Nam (video and article), where an IFAD-supported project has been working to improve rural women’s access to training and finance, UN Messenger of Peace Midori said, “What I saw was the power of equality, responsibility, and hope. And the difference people can make when they feel in control.” Midori was in Viet Nam in December 2018 with her International Community Engagement Program.
Midori noted that by having access to rural finance, the women she met said they felt a strong sense of responsibility to participate in building local economies as well as to bring about positive changes in their communities.
In Tuyen Quang province, IFAD has supported women’s participation in farming groups and has increased their access to financial services, markets and private agribusiness investors. As a result, the number of rural households suffering from food shortages has been reduced by 25 per cent.
“By talking with the women, I learned that development isn’t just about financial gain; it’s about seeing a future. The women I met weren’t just thinking about today, they were using their money to educate their children and invest in tomorrow,” Midori told the audience.
“It is a very powerful way to address inequality. When I spoke to the girls in the villages, they told me their mothers and aunts were their inspiration; their role models,” she added.
IFAD development experts have found that when gender inequality is addressed and the underlying barriers for women and girls are removed, it is possible to unlock the potential for all people—men, women, boys, and girls—to be equally valued and to lead productive lives.