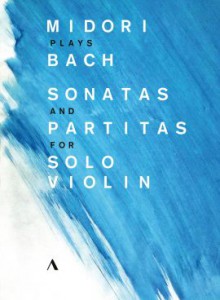 Recorded at the Castle Köthen, Germany

“[Midori] brings the music ‘home’ to the castle at Köthen where Bach wrote it, performing it in the castle’s various rooms. The idea is a nice one, and it’s equally nice to be able to watch the immersed concentration on Midori’s face as she puts in her graceful, heartfelt, neatly ornamented and technically superb performances.” (Gramophone)

“There is something profoundly moving about hearing Bach in the very spaces in which he would have played these works, and one cannot fail to be mesmerised by Midori’s flawless technique, by the orchestra of colours she coaxes from just four strings, by the eloquence and rhetoric of her phrasing. Her playing (on a burnished-toned Guarneri del Gesù of 1734) is by turns graceful and delicate, robust and muscular. Moments of dazzling bravura turn to others of rapt contemplation. Tempos ebb and flow, moulded with a pliant rubato, yet the music retains its sense of architecture. …. The acoustic of each room is part of the performance, keeping the sound afloat and adding resonant sonorities to these solo works – solo, but ‘never alone’, as Midori puts it. Indeed, her capacity to suggest many voices –from a silky soprano to a yearning bass – is remarkable. The performances are interwoven with the violinist’s own fleeting thoughts on her relationship with Bach.” (BBC Music Magazine)