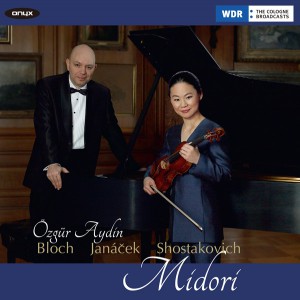 Buy on iTunes
Buy on Amazon

“Midori’s playing in these three satisfyingly aligned 20th century violin and piano sonatas is imbued not just with a keen beauty but somehow with a thoughtfulness. Perhaps one is influenced by her comments cited in the booklet essay, in which she sees the works as simultaneously embodying the war-torn darkness of the times and a spiritual aspiration beyond it. Bloch’s single-span second sonata, subtitled Poème mystique (1924), is mainly on the striving side – a beautiful, rhapsodic unfolding – while brutalism is obtruded by the middle movement of Shostakovich’s 1968 sonata. Janáček’s fascinatingly inventive and searching four-movement sonata (1922) is the disc’s deeply rewarding centrepiece.”